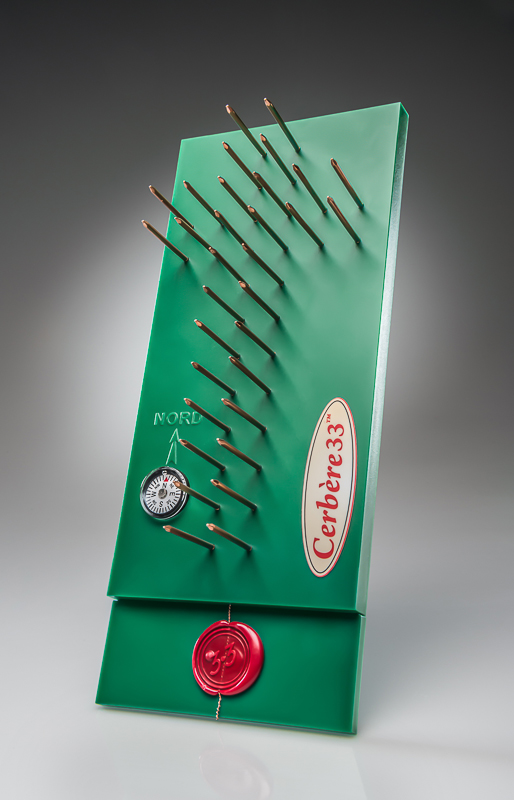 Received and tried yesterday: GREAT !! I slept like a baby, no nightmares, dreams of yellow and bloom (solar plexus) and light, I'm so relieved! Fun: I feel my mattress as if it were twice as bulky, and bulging up. I feel pushed up. Thank you for this wonderful device! " A.C.-Lyon

Device of a formidable efficiency with effect "boomerang" in verse the people who could have intentions "negative" towards you. Since I installed it under my bed in January 2018, I never had nightmares or "unpleasant" dreams , on the contrary ... This device allowed me to access "things" subtle and kind hearted and I take it everywhere with me when I travel (apartments / houses for rent, hotels). Whether it's a placebo effect or a resurgence of ancestral knowledge, it works and that's the main thing. Even more effective when you begin or follow a spiritual step. Indeed, it has allowed...

The Cerbere33 is very helpfull. I used to have cold sweates with disturbed sleeps and  odd fevers nights , nightmares and very tired each morning, as if I was awoke all night long, even if I get to bed early. I used to wake up with headaches. Eversince...I have complete and refreshing sleeps even if I go late to bed; I have my vim back, an amazing clear-sightedness, I'm in good mood each morning and a happier wakefullness! Ready to go to my work as a therapist! Thank you ! I strongly recommended the Cerbere33!

I have a child with an auto-immune disease occured 6 years ago. Because of her treament, her tiredness and hypersensitivity, her nights became more and more agitated. She needs to sleep very well to regenerate in order to help in her healing, and she  absolutely was not. It was unexpected for me to encounter the Cerbere33 and it has been provitential in many ways. I wanted my daughter to get rid of her nigthmares in order to rest properly, but I didn't expected the others  device's unforeseen effects. It took a whole week for my daughter to "initialize" herself with the...

Since birth, my seven year old daughter got up every morning with dark circle under her  eyes. She was lying at 20h, woke up at 8am and showed signs of fatigue under her eyes and was agitated during the day. We placed Cerbere33 under her bed.   From the first night, after 15mn in bed, she called me into her room to complain about the cat who kept scratching at the door of her bedroom. But the cat was actually out of the house . I monitored the door from 20h till 22h30 but she kept on complaining , there was no...